Memorial Day 2012 weekend was on the corner and a lot of destinations ran through my mind. Southern Utah, Florida, West Virginia to name a few. Finally I got myself locked onto Maine and New Hampshire. I read forums/reviews and people had some fantastic experience along the Maine coastline, especially photographers. Another reason for hitting Maine was because a fish named "Alewife" runs across the rivers along Damariscotta area in Maine. A count of around 200,000 is noted every year around first week of May through mid June. Lot of birds are definitely attracted at this event mainly Raptors including Eagles and Ospreys. I didn't have a clue that Sea Gulls will be there as well and boy I was provided with some spectacular action from them too.
I started my journey on Saturday afternoon (Tickets were way expensive on Friday and I had no intentions of over-spending on the trip).  Had a dual thought initially whether I want to take a flight or drive. Drive would have been a total of around 20 hours two way and would surely have had my energy sucked big time. I had to preserve it for my Hiking and other expeditions in Maine. So finally decided to fly to Boston from Baltimore and drive from there. After doing my Math, I came to the conclusion that at any given day of my trip I wouldn't be driving more than 5 hours. That was reasonably doable for me and I was confident I would be able to drive as well as hike in a single day.
Reached Boston at 4:30PM on Saturday evening. My plan was to start driving at 5:00PM and hit Portland Head Light for Sunset around 7:30PM. Expected sunset time for the day was 8:10PM.  Portland Head Light has much better shots at sunrise (because of eastern coastline) but going there for sunset was good because that way I could explore the place and spot good locations from where I could take my early morning shots for the next day. As planned reached to Portland Head Light at 7:45PM. Photography was not my first preference at that time of the day so explored the area. I hiked for about 30 minutes along the cliffs and discovered a spot where I can photograph for tomorrow morning. So I had my next day morning's location locked down! Had a long day the next day so slept early at my Motel (Around 9:30PM)
DAY 1:
Alarm rings at 3:00AM the next day! Started towards Portland Head Light at 3:30PM. Expected arrival time was 4:30PM. I needed 30 minutes to hike to my locked spot. Since sunrise time was 5:05AM, I had to make sure I reach there by 4:50AM. I had absolutely no traffic issues at 3:30AM plus I pushed a little harder on my car's accelerator to reach earlier at Portland Headlight House. Got there around 4:15PM and hiked for 30 minutes to get to my spot. I set up the tripod, took some test shots and waited for the orange light to come out of the sea. And then it was one of the most beautiful sunrises I had ever seen!!! Wow I wished that the moment should stop here and everything should just freeze forever!! I'll not speak much but let my photograph tell you the story: 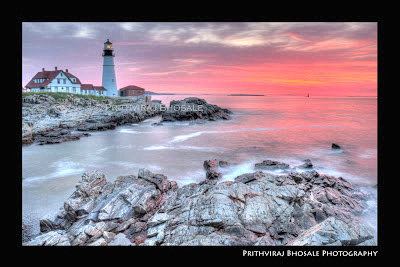 Well you saw what I actually experienced which I feel is beyond words so I'll move ahead with my story. I had a 45 minute drive to  Damariscotta area in Maine where the Ospreys were located. I reached Damariscotta at 6:30AM. Took me a while to explore the area and I finally settled down at a spot after an hour. I waited waited and waited. A lot of fish activity was going on in the river, but no Ospreys. There were a bunch of Sea Gulls that entertained me for a few shots. Some photographers came, stayed and left so had company while I was hanging out in the area. Here are few of the Gull photos I clicked: 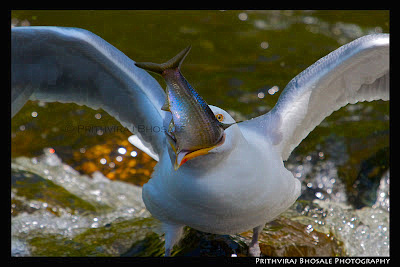 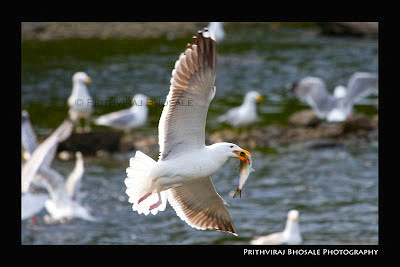 So coming back to my wait, it was now close to 6:00PM. I had seen Osprey activity but way far away, beyond my camera's reach. I was losing hope and thought my luck hasn't supported me as far as Ospreys are concerned (I was keeping myself happy by telling myself that I have seen a wonderful sunrise today and have no reason to get disappointed). I hoped for magic to happen and it did happen around 6:30PM. Out of nowhere, here comes a beautiful Osprey with Fish in it's talons!! I had just a second of reaction time. I focused through my viewfinder and my shutter went "Bang Bang Bang"!! All of this lasted for less than 30 seconds! Here is the outcome: 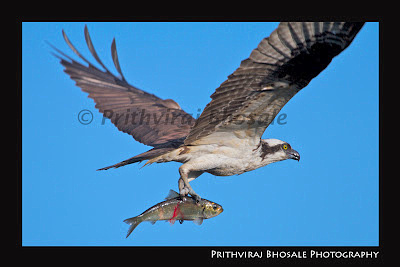 So I looked up and thanked God! I told him I was extremely thankful to him because he cared for my patience and efforts!! And there my Day one ended in style! Came back to my room smiling and went off to bed. Next day was a big and long day too!
DAY 2:
Woke up at 3:30AM and started for Acadia National Park. It was a 2.5 hour drive from where I stayed. So I knew my total drive time back and forth would be 5 hours. Plus I knew I had to hike in Acadia National Park. I was mentally convincing myself that I want to do this at any cost throughout the time I was driving to the park. Reached there around 6.30AM. I knew my spots since I had studied the Park's map (The park is around 47000 acres in area so I had to pick my spots before I drove there). There was no way I could go there and then explore the park!! I would have to write another blog post if I start speaking in detail about Acadia, so I'll cut it short and tell you that I visited around 7 spots in Acadia and hiked for more than 4 miles in the woods and along the lakeside. Here is one of the shots from Acadia National Park: 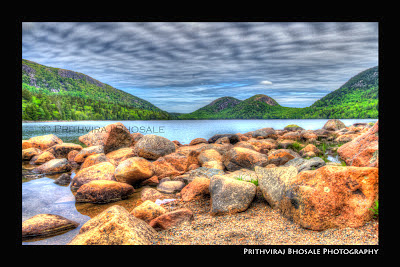 Started driving from Acadia National Park after lunch. My plan was to hit Pemaquid Light House by sunset. While coming back I had ample time so took some intermediate stops at places where I thought I should stop and enjoy Nature or click snaps. Here is one of the spots that I stopped and took a photograph: 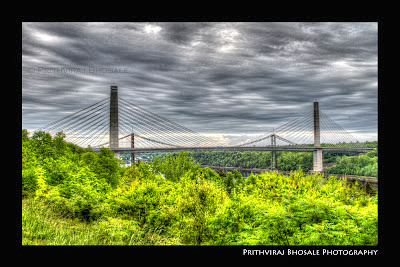 Took me nice 4 hours to come to Pemaquid Light House. It is a wonderful place along the coastal cliffs and the sunset view is phenomenal ! I hiked a little bit along the cliffs (Had very less stamina left from my hikes in Acadia National Park). Came across a place along the cliffs where a small portion of water had accumulated in the rocks. I realized that at a certain position, the Pemaquid Light House has its reflections falling into the water. I had to take a snap !! That was my final shot of the day and I headed to my room after that. I'll write less and let my picture speak for you! Here is the photo: 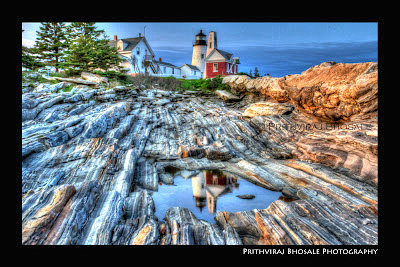 DAY 3:
It was supposed to Rain the whole day on Day 3. The only place where I was thinking to be was Damariscotta for the Ospreys....Again!! Reached there by 8:30AM. It was raining cats and dogs outside!! I had no choice but to sit in my car and hear the rainfall. Weather said the rains might open between 12:30PM to 3:00PM and start again after that. So I had a 2.5 hour window. Plus the sky was cloudy and light was too bad for a decent photo. I still decided to go for it and changed my Camera settings to make sure that I get an acceptable image in low light situations. So rains opened around 12:30PM and I sat with my camera waiting for action to happen.  I had already waited 4 hours in my car and was mentally preparing to wait for another 2.5 hours. No action whatsoever. I told myself: "Lets go home and take an afternoon nap". I needed rest. I started driving back to my room. Drove for about 5 minutes and my mind said: "Go back man. This is your chance" (My wife says I make a lot of last minute changes which I feel is true!!). I drove back and sat again with my camera. Five minutes and this guy fishes right in front of me!!!! I am smiling from inside and saying: "WHAT THE HECK! I am glad I came back!". The light was very low but I managed to get some good shots out of this guy. Here are a few examples: 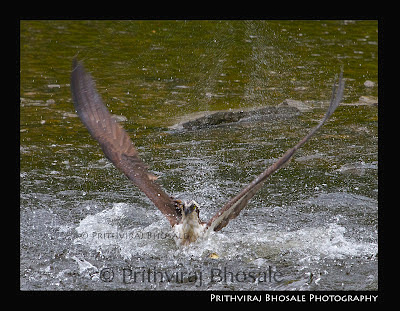 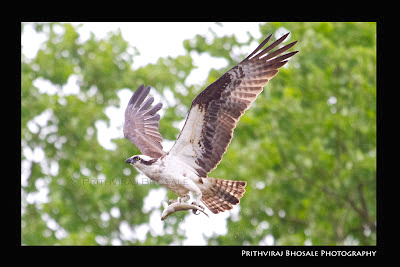 Again, looked up and thanked god !! (I always do that when I get a great shot)!! And so my Day 3 ends in style...Again!! Started the next day early morning and flew from Boston to Baltimore. Had to log into my office computer that day! I had almost forgot in the past few days that I have a job and duties to perform!!

Finally, I clicked a picture of myself at the coast of Maine and when I saw it, I realized I was actually following my passion of Photography and Travel and had enjoyed every moment of it. I had even forgotten about the fact that I stay in Maryland! Thought I should relate this picture to "Life" in some or the other way: 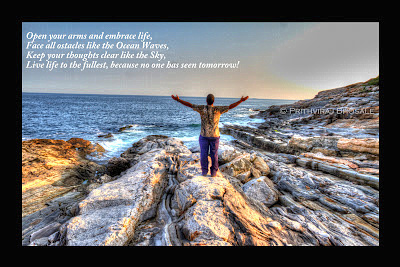 So here is my story of a wonderful trip to Maine! I hope you guys enjoyed reading through the post. I would highly recommend Maine especially in the Fall season when leaves turn to Yellow and Orange. Maine and New Hampshire have one of the best falls in the United States! And please do remember me and this post when you visit the area!! Chao!
Next Post »